The main reason I decided to go on exchange is to live in a country that I don’t know the language then see how I will survive. I took it to another level by not learning Italian before I arrived in Milan which I totally regret. I have been in here for about one month. The host university is Bocconi University, one of the most prestigious universities in Italy. The Italian guy sitting next to me on the plane was so excited when he knew that I study here.

The main highlight in Italy for me is Italian food. It seems like you never go wrong in Italy. I always randomly order in restaurants due to my limited knowledge of the language but the results so far have never disappointed me. Olives, for example, are one of the few things that I don’t like to eat but it is different story here. Gelato also lives up to my high expectation 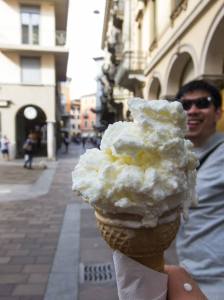 Being in the north of Italy may be the biggest pro in terms of travelling as it is easy to access to other countries in Europe. I have visited Switzerland two times already this semester. It only takes couple hours to go to Switzerland by train. I have plans to go watching some football matches in other countries soon.

If you are a football fan, you will absolutely enjoy the time in Europe. I spend most of my weekend watching football matches. To watch European league football in Australia, sacrificing some of your sleeping time is a minimum requirement as they usually come late night, and forget about the UEFA Champions League if you have class in the morning. Watching a match without having to yawn every ten minutes is just like heaven.

Italian’s passion for football is incredibly high. I went to San Siro to watch the Milan derby match (AC Milan vs Inter Milan) last few weeks. The stadium is the biggest stadium I have ever visited. During the match, I sometimes didn’t hear the referee’s whistle as the fans chanted (shouted) really loud. I was just a guy who wanted to watch a good match, but sitting in the Inter fans area, I had no choice but to just go along with them otherwise I might not be able to go home.

I have heard about the Italian bureaucracy before coming here. To experience it is interesting to me. It is like each person has his own system to finish the business. However, I don’t mind as long as it is done.

If you are not certain about going on exchange for whatever reasons, I am not good at encouraging people but I really want you to go for it. You could just pick a country randomly like when I randomly order in restaurants and the result will surprise you.