I remember the moment I found out I had been accepted for exchange in Ningbo, a city in Zhejiang in China. I would be studying at the University of Nottingham, which has campuses in England and Malaysia. I was overjoyed.

One of the questions I asked of me was “Why are you going there?”. At first, it wasn’t a question I could really answer myself. The reason I’d chosen Ningbo was because I knew next to nothing about it. I had been to study in Guangzhou in Southern China before. Guangzhou is a seemingly endless urban agglomeration sitting on the Pearl River. But Ningbo? I wasn’t actually sure. I’ve been a total sinophile since my last year of High School, loving China and Chinese culture, going so far as to study the language at UTS, so it should’ve been no surprise I came to China. But in this blog post, I’ll give you a few reasons as to why Ningbo is great and why I’m loving it. 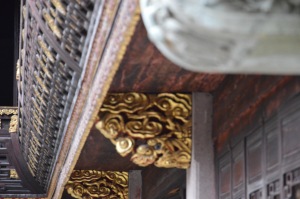 I arrived here three weeks ago now and my brief time here has already allowed me to give multiple reasons as to why I came here.

Firstly, the architecture. Ningbo is home to many old temples and buildings designed in China’s imperial period. Tianyi Pavilion was founded in 1561 during the Ming dynasty. It’s a beautiful lush green place; a slice of premodern China in amongst the gridded streets of an increasingly large and growing city. Tianfeng Pagoda is tower which has stood in the same spot since the Tang dynasty in the 7th century, being destroyed and rebuilt multiple times. From the very top of the tower (Which me and my friends climbed to the top of) you can see the rapidly expanding Ningbo skyline.

Gate into the city centre

Secondly, the food. The food in Ningbo is insanely good and far more affordable than anything at home. Being on the coast, the seafood here is of exceptional quality. In my first week here, some local friends took me to eat at a place which they referred to as a HaoChi  (meaning 蚝翅, literally “oyster chicken wing”) which sounds a lot like the Chinese word for delicious， 好吃. At this low-key but amazing establishment on Houmiao street near Wanda Plaza shopping centre (a short 10 minute cab ride from uni) we gorged ourselves on spicy boiled crayfish, roasted eggplant, barbecue chicken wings, lamb skewers, enoki mushrooms and garlic chilli oysters, three times over for 70 RMB per person. Yes, including drinks. 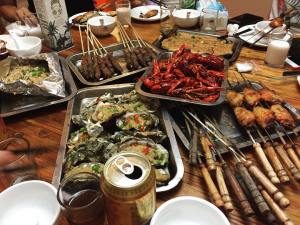 Finally, the people I’ve met here in Ningbo are amazing, both the local people and international students are so friendly and welcoming. It is so easy to make good friends here. 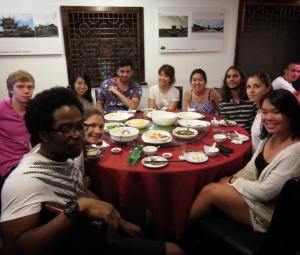 Myself and my friends eating in a traditional Ningbo restaurant.

If those aren’t reasons enough to make you come here then I don’t know what is. Perhaps cheap drinks at the party district in 老外滩 (Laowaitan)?

UTS Global Exchange “Why did you go there?” – University of Nottingham, Ningbo, China.
%d bloggers like this: