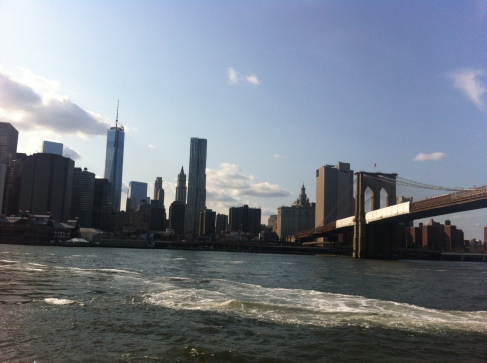 Imagine how great it would be to tell your friends that you’ve living in New York, the concrete jungle where dreams are made of. I still can’t quite wrap my head around the fact that I’m living in Manhattan, just steps away from the world’s biggest events, festivals, and shows.

It’s been just a little over two weeks since I arrived at JFK airport, and everything and everyone has been fantastic. The Study Abroad orientation was a breeze, and I’ve met and become good friends with other Aussies, as well as Germans, Irish, UK, Portugese, and Dutch people. Meeting and talking to Americans is super easy – they love the Aussie accent!

I’m staying in 182 Broadway, which is a new dorm building that opened up for the first time this semester. I’m sharing a room with two lovely American roommates, and you get a private bathroom. There’s a common floor with a kitchen, study, lounge, gym, and free laundry (!). Sometimes I wished I requested a room in Fulton for the convenience of an in-room kitchen, but there’s heaps of value on the meal plan so I don’t know how often I’d really be cooking.

Pace is exactly like UTS in that it doesn’t have a campus so much as it has buildings. There’s a main tower (One Pace Plaza) where pretty much all the classes take place. Sure, they have a more American-style college campus up in Westchester New York (read: upstate New York), but who’s complaining when you’re right in the centre of the Financial District, and only 10-15 minutes by subway away from Midtown Manhattan? Classes are small. I don’t have any lectures, just what we would call tutorials. It’s roughly 25-30 per class, and participation is a big part of your grade. I also need to wrap my head around having homework each week that also counts towards your grade.

New York is a big city, and even though I’m here for a good four/five months (hello, New Year’s Eve in Times Square!), there’s no way I’d be able to cover everything. I got all the touristy stuff out of the way last time I visited, so it’s all been about the local culture. I’ve participated in the Color(/Colour) Run in Brooklyn, saw a movie at the South Street Seaport, and watched Shannon O’Neill and Zach Woods perform a free improv show at the UCB with a troupe of other comedians (a must for all comedy and Amy Poehler – who founded UCB – fans).

Next on the agenda (apart from studying)? The Feast of San Gennaro, The New Yorker Festival, weekend trips to Washington DC and Miami (plus plans for Pennsylvania, Boston, and Connecticut), and I’ve got tickets to ‘The Daily Show’ taping. I think the next few months are going to be phenomenal.