The first thing you’re greeted with when you arrive at Austin airport is a rack of t-shirts. Half of them are burnt orange and bear the Longhorns logo – the icon of the University of Texas, while the other half are decorated in a fake tie dye pattern and, on the front, friendly text announces the city’s unofficial motto: “Keep Austin Weird”. This sums up the duality of a town like Austin perfectly.

On one hand, it’s the capital of Texas – a state that almost matches the economic output of the whole country of Australia, and well exceeds Australia’s population, and a state that was built on independence and, for a time, was its own country. It’s the centre of the University of Texas system – its largest campus is located here and boasts more than 50,000 students and most certainly a “college town”. It’s also an emerging hub of technological and scientific research, and for a long time has been host to a thriving games industry.

At the same time, Austin has long been a beacon of the strange and subversive in the sea of conservatism that is the rest of Texas. All around the city there are pockets where the 1970s seem to have never ended. Tie dye is still fashionable, every street corner holds the lingering scent of pot, murals and graffiti have a certain psychedelic twang about them, odd shops sport a weird mix of 60’s design sense and nostalgic kitsch, homeless people discuss existentialism and every public space has a food truck serving some kind of ‘fusion’ food (tex-mex japapense fusion being a highlight). The place is a living, breathing Richard Linklater film (which figures since they were all shot here! I am living above the street corner that appears in the opening shot of 1991’s Slacker)  Of course times are changing and Austin is one of the fastest growing cities in America.

And so it goes on – the conservative and established and the libertarian, free spirit, free love types all mixed together. The place has a good vibe. Of course it is still Texas: most stores are only conveniently accessible by car, the food portions are massive (everything is bigger in Texas), people walk around in cowboy boots and really do say things like “howdy” and “y’all”, it’s fiercely independent (good luck finding an American flag not accompanied by the state’s own ‘Lone Star’ flag), the beer is always Texan. 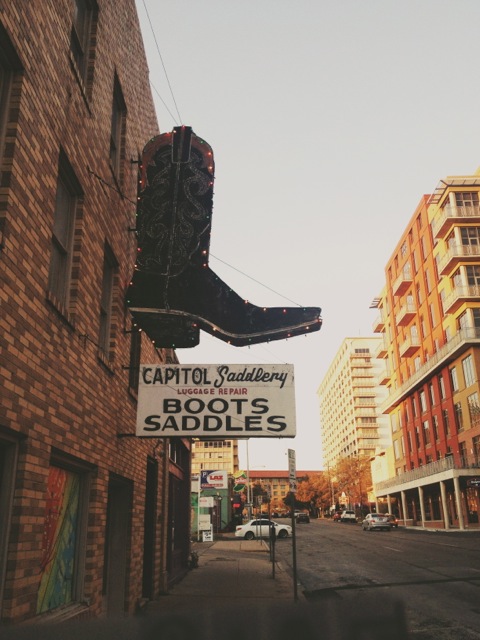 Here, there’s such a thing as Chicken Fried Steak, and a hotdog wrapped in bacon, deep fried and then served in a bun covered in mac and cheese seems perfectly reasonable. But still everywhere has a vegan option and everything is organic (the local-produce movement basically started here, so too did the organic chain store Wholefoods, which has a mega-store downtown). It feels like anything is possible, and after a while nothing can truly surprise you.

The campus is perfect. The whole place feels exactly like a college movie: frat houses and sororities look like they ought to, everything from the backpacks and the notebooks to the way the dorms are designed just feels how you expect it to feel, the whole place is filled with trees and grand buildings, and there’s always an activity going on somewhere on campus. Being a Media Arts and Production major in Sydney, I enrolled in Radio-Television-Film classes at UT, and have found the workload to be quite heavy. The range of topics you can study is not only broader, but individual classes are more specific (for example, I am taking a class on the films of Alfred Hitchcock).

One of the staggering things about the US is the number of choices to be made – every meal has a number of options, every subject has choices to be made, the sheer number of types of breakfast cereal and sodas make simple things like eating take some deliberation. At any rate, I have had the chance to study classes that could never be available at UTS, and have discovered some new hobbies (like game development) along the way!

And so things have been excellent so far:  class, socialising, enjoying SXSW, eating and eating and eating, getting covered in colorful powder at the local Hindu group’s Holi celebrations, visting NASA in Houston… and shooting films. Of course it feels like a few days have passed but in reality we only have three weeks of class left and then I am back on the road once more. Everything happens in a blur of energy and in the moments of calm you realise how quickly its all flying by – before I know it I’ll be back in Sydney… and already planning my next visit.

One thought on “Being weird in Austin” Leave a comment ›